HOW I LEARNED TO LEAD

I read in the Bible about the man's role in the home. I also read books on Biblical counseling that helped me begin to see where I had gotten off God's path in my family responsibilities. I thought Rachel was the enemy of my ministry. I thought that, if she stopped giving me a hard time, then everything would straighten out. It took me a long time to realize that the real problem was "old Joe." My sinful fleshly nature was what I was struggling with, as Paul described in Romans chapter seven. Rachel was not the enemy of my ministry. God was using her as an instrument to make me deal with my own pride, selfishness, rebellion, and laziness. I needed to take responsibility for my own actions and the mess my home was in and stop blaming Rachel for my irresponsibility.

In the meantime, the financial pressures continued to mount and Rachel became more angry and resistant. I began to relieve the pressures on her by taking the responsibility for managing the money and dealing with the bill collectors when they called. Rachel's emotions were not up to dealing with the pressures and humiliation that bill collectors exert. Bill collectors help teach the undisciplined and the irresponsible how to manage money and resist the temptation to buy impulsively. Rachel already knew these lessons. I was the one who needed to learn them. I realized that bill collectors wanted to deal with the wife because she was more vulnerable to pressure and was usually more responsible in money matters than the husband. The Lord showed me it was my responsibility as the head of the household to deal with the bill collectors directly. This was a pressure Rachel was not intended to endure. So I told her that, every time a bill collector called, just tell him to call back when I was home. I handled the money, and he needed to talk to me and not her.

Rachel was earning most of the money, and she was turning her paychecks over to me. Included in the headship of the home is the accountability before the Lord for the oversight of the home, the decisions that are made, and what goes on in the home. I realized that on judgment day God would call me to account for how the money was handled, how the children were disciplined, and how order was maintained in the home.

I realized more and more how I had manipulated Rachel into taking over my responsibilities in the home. I gradually began to take them back. I realized that, no matter who earned what in the home, I as the head was responsible to see the money went into "the pot" and spent as vitally needed. Only if there was a surplus could the person who earned it be able to keep it. Much like in a business, all the staff work and produce, but the owner sees who can keep what and how much. Rachel was used to earning and spending her own money, and this concept was very difficult for her to accept. She had to "die to pride" and give me her money even though she knew I was foolish and had such poor judgment. After she stepped back and allowed the Lord to deal with me and my handling of the money, He then began to teach me. I gradually developed self-discipline in money matters. (The bill collectors were greatly used by the Lord in this regard.)

Next my eyes were opened to the realization that Rachel had quite a hard time in keeping the house organized and straight. I looked on her as my foreman who was accountable to me for the housekeeping. She said I was "blind" and could walk through the house and not notice anything! My mother had always picked up after me, and I paid no attention to housework. I figured housework was a woman's responsibility and took no notice. Then the Lord impressed on me that Rachel was responsible for keeping things neat, but sometimes she was just too tired to do much. Our arguing, her fears, and the tensions between us-as the Lord was dealing with me-were taking their toll. I began to help her get organized again. Jesus told His disciples that he who would be great must be a servant. I realized that even though Rachel was accountable to me for the upkeep of the house, I was her servant and needed to help her accomplish this. I began to "see" things that needed to be done and either did them myself or helped her do them. Sometimes I helped her to get organized so that she could do them herself.

I began to train our children to do chores to help out their mother. The children were rebellious, lazy and clumsy (like their dad), and so Rachel impatiently pushed them aside and did most things herself. The children loved this and would become even slower to respond. I realized this is what I had done as a youngster, so I began to train Rachel not to do some of the chores. She was so fast and efficient that I had to be alert to remind her not to do what the children should be doing. My leadership grew as I trained the children and all their rebellion, pride, and selfishness came out against me. My son Justin asked me one day, "Dad, why is it that there are no problems in the house until you come home?" I replied, "Well, son, 'when the cat is away, the mice will play.' When dad is gone, you can do what you want and be a rebel; but when I drive up, authority arrives and rebellion clashes with authority. You think there is no rebellion in you and that I create it when I tell you to do things you do not want to do. But the fact of the matter is that you were born rebellious and dad has to deal with that rebellion whenever he gives you an order. That rebellion comes out because I am exerting authority in the home and rebels do not like authority and fight against it. Once you become obedient and self-disciplined, it will not make a lot of difference when I come home and you will be ready to go out on your own and become the authority in your own home. In the meantime, there are chores for you to learn to do with a good attitude."

I had much more strength and stamina to deal with training the children in chores than Rachel did. I will never forget training my son to empty the trash. He was never in the mood to do this. He always wanted to read and saw no sense in emptying the trash. When I tried to motivate him by explaining how he was having an opportunity to minister like Jesus did in washing people's dirty feet by emptying the trash, he did not respond. Then I tried explaining that he could never hold down a job until he learned to empty the trash.

The high minimum wage meant that a teenager had to start off fast and efficient to be productive enough to be worth the minimum wage. No employer today has the time to spend training a slow, unthinking, careless teenager like Justin used to be. He needed to be able to pay the employee what he was worth. (The wage might have to be very little at first when the teenager did not produce much.) Therefore, a young man has to learn at home how to think through a job and overcome his laziness on little jobs before he can tackle bigger ones. How can a person dream about becoming the president of the United States if he has never learned to empty the trash without supervision? My son responded that he did not want to become president, and why didn't we forget the trash? However, it was very humiliating for him to be lectured by his dad. He would empty the trash so that I would leave him alone. When I inspected his work afterwards, sometimes I would find that he had been forgetful and careless by leaving off the outside garbage can lid or the trash box lid inside, etc. I either had to do his work over or supervise him to do it over. I continued to train him to do it over until he did it diligently, faithfully and enthusiastically without supervision. I was learning to lead my family!

I Peter 3:1-7 ". . . you married women, be submissive to your own husbands-subordinate yourselves as being secondary to and dependent on them, and adapt yourselves to them. So that even if any do not obey the Word (of God), they may be won over not by discussion but by the (godly) lives of their wives, when they observe the pure and modest way in which you conduct yourselves, together with your reverence (for your husband . . .)" (AB).

I Timothy 5:9-14 ". . . I will therefore that the younger women marry, bear children, guide the house, give no occasion to the adversary to speak reproachfully."

Ephesians 5:23-33 ". . . the husband is head of the wife as Christ is the Head of the church . . . As the church is subject to Christ, so let wives also be subject in everything to their husbands. Husbands, love your wives, as Christ loved the church and gave Himself up for her . . . Even so husbands should love their wives as (being in a sense) their own bodies. He who loves his own wife loves himself. For this reason a man shall leave his father and his mother and shall be joined to his wife, and the two shall become one flesh. . . . However, let each man of you (without exception) love his wife as (being in a sense) his very own self" (AB).

Dealing with the Self Life:

Ephesians 6:1 "Children obey your parents in the Lord" (KJV).

Proverbs 20:11 "Even a child is known by his doings whether his work be pure, and whether it be right" (KJV).

As the husband, am I taking the financial pressure in the home or have I manipulated my wife into taking this pressure?

Do I resent my wife's attempt to correct me, or do I see the Lord using her to help me deal with my faults?

Do I realize and act on the fact that my sinful nature inherited from Adam (my "old man" or "old woman") is the real source of my problems, or do I usually try to shift the blame to others?

Have I trained my children to obey their mother?

Have I trained them to do their share of the household chores? 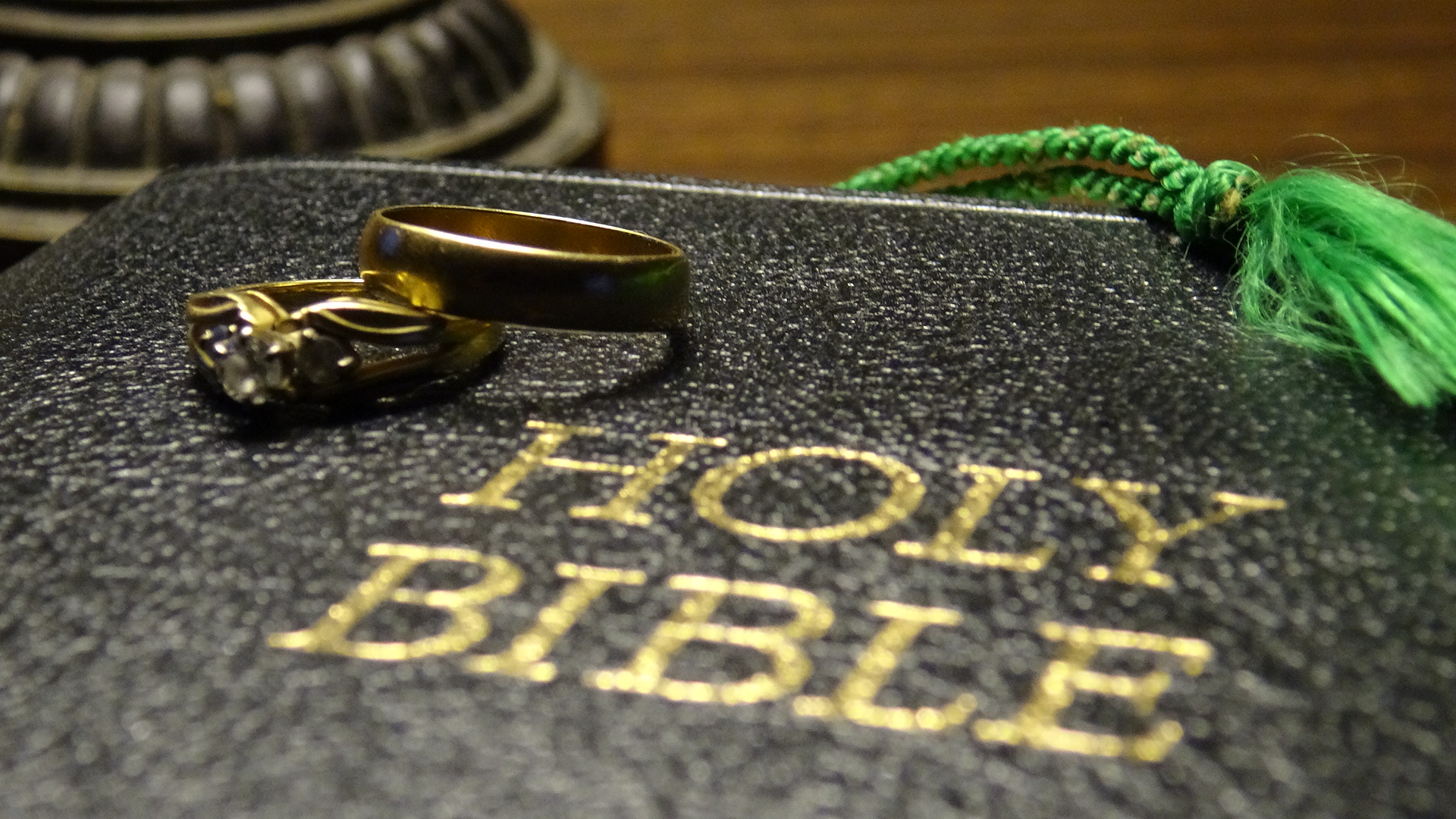