HOW I LEARNED REAL LOVE

A quality I had plenty of was selfish love. I had learned to manipulate people to get what I wanted. I married Rachel because she was pretty and I thought she would make a good mother for my children. She was also smart and well-educated. She could carry on interesting conversations in religion, politics, and other subjects I was interested in. And she made good money. She pleased ME! This was the basis of my romantic, sentimental love for her in our courtship and the beginning of our marriage. I did not know what self-sacrificing love was except what I had seen in my family and in some church families when I was growing up.

As I stated earlier, we had not been married long when I rededicated my life to the Lord. Among other things that He began to teach me at that time was how to show love, His love. I was teaching a Sunday school class in the little mission church where we were members. The topic was love. The Lord began to show me through His Word that I did not know anything about real love. We had our first child and another one on the way when Rachel developed phlebitis in her legs and the doctor told her she had to sit with her legs elevated most of the time. I suddenly learned to clean up and do housework. Our two-year-old was in diapers. I had the job of kneeling at the toilet and rinsing these diapers. While I was doing this, the Lord began to show me that I was starting to learn about love. I thought love was love-making and saying sweet nothings in the moonlight. I could not see the connection with that and dirty diapers. The Lord was patient and just kept dealing with me. He told me that I was learning real love by rinsing the diapers-a nasty job I hated doing-for Rachel and thereby learning to really love her. He showed me in His Word that real love was unselfish and self-sacrificing and came only from Him. I had to begin to let my selfish love go in order for His unselfish love to begin to flow through me to others. Unselfish love was a quality I greatly lacked, but the Lord was gracious and began to supply me with His grace to love others His way.

Later in our marriage when I had resigned my commission in the Air Force, dropped out of graduate school, and was encountering many failures in my counseling ministry, Rachel became frustrated and angry at the financial pressure and my foolishness. She lost the romantic love for me and became angry enough to do me in (I thought). I told the Lord that I thought my marriage was over because Rachel did not love me anymore. He brought a verse to my mind: "If you love Me, keep My commandments" (John 14:15). He showed me that real love was obedient love. He was not concerned that I had "feelings" for Him but that I was obedient. This showed self-sacrificing love even if I did not like Him or what I was going through at the time. In turn He showed me that Rachel had real love for me even though she had no "feelings" for me because she did not leave me. I realized she wanted to leave so badly she could taste it. Others told her she should leave and not put up with such nonsense. The Lord showed me that every day that she stayed in my home and was obedient, she was showing real love. The feeling part was very shallow and would come later. He showed me that underneath her surface anger was real love. If I would just be patient, this would surface again. In the meantime I had to forgive her when she would give me tongue lashings for being so foolish. I knew our circumstances were very trying and the financial pressures of the faith ministry scared her. No matter what she said to me, I realized that it was the "old Rachel" temporarily coming out. But I also knew that the new born-again Rachel who loved me with Christ's love would come out again. She was the real Rachel. The Lord gave me the gift of faith to see not by appearances but by what His Word said. I was learning to walk by faith and not by sight, in more ways than one. The Lord gave me self-sacrificing love as we both moved through the disillusionment stage of our marriage.

One morning as we all sat at the breakfast table, my son began to act defiant. I told him he was going to have to have a spanking if he did not apologize. He said he was not going to be spanked, and Rachel sympathized with him. She and I began to argue. She then said, "Why don't you just pack your bags and leave?" I got up from the table, threw some clothes in a suitcase, and went to my marriage counseling office to think things over. I called a friend who talked with me and prayed with me. I kept thinking and praying about this sudden disaster and how it could have happened. I began to realize that the cause of it was that Rachel often took up for the kids in front of them when I disciplined them because she did not respect my authority. She also had reservations about her marriage vows. If things got bad enough, she could always leave or I could. She had not made a total commitment to her vows and marriage "until death do us part." This uncertainty caused her to be divided in her loyalties in the home.

I went home and had a long talk with her. She said she had acted hastily and really did not want me to leave. I said I never really wanted to leave in the first place. I said I would come home, but I wanted her to do two things. I wanted her to pray about supporting me when I disciplined the children and not undermine my authority in the home anymore. I also said I wanted her to think about her wedding vows and consider making a total commitment to our marriage "until death do us part." I said that lust was using someone else and then leaving him when the going got rough. Real love was a lifetime commitment. I asked her to ask the Lord to give her the real love and strength to make a permanent commitment to our marriage without reservations. She did this and I came back home that day. She followed through on her commitments, and things were a lot better in our home after that. The Lord turned a disaster into a great victory and turning point in our marriage. We continued to learn real love for each other.

Ephesians 5:25, 28 "So ought men to love their wives as their own bodies. He that loves his wife loves himself. Husbands love your wives even as Christ also loved the Church, and gave Himself for it."

Mark 10:9 "What therefore God has joined together (in holy matrimony) let not man put asunder (break up)" (KJV).

1 Corinthians 7:10 "But to the married (people) I (Paul) give charge, not I but the Lord, that the wife is not to separate from her husband" (AB).

Freed from the power and control of the "Old Man" in Christ: Romans 6:6 "We know that our old (unrenewed) self was nailed to the cross with Him in order that ...we might no longer be the slaves of sin" (AB).

The "New Man" in Christ:

Ephesians 4:22-24 " ...put off and discard your old unrenewed self ...and put on the new nature (the regenerate self) created in God's image, in true righteousness and holiness."

What were the basic reasons that drew you to your spouse in your courtship?

Were they selfish or unselfish reasons?

Are you still in the romantic, sentimental stage of your marriage, or have you come into the disillusionment stage?

Have you learned real self sacrificing love for your mate that only God gives?

Have you made a permanent commitment to your wedding vows without reservations, or are you still planning on leaving if the going gets bad enough?

Are you letting your "Old Man" come out frequently, or are you usually putting on the "New Man" in Christ? 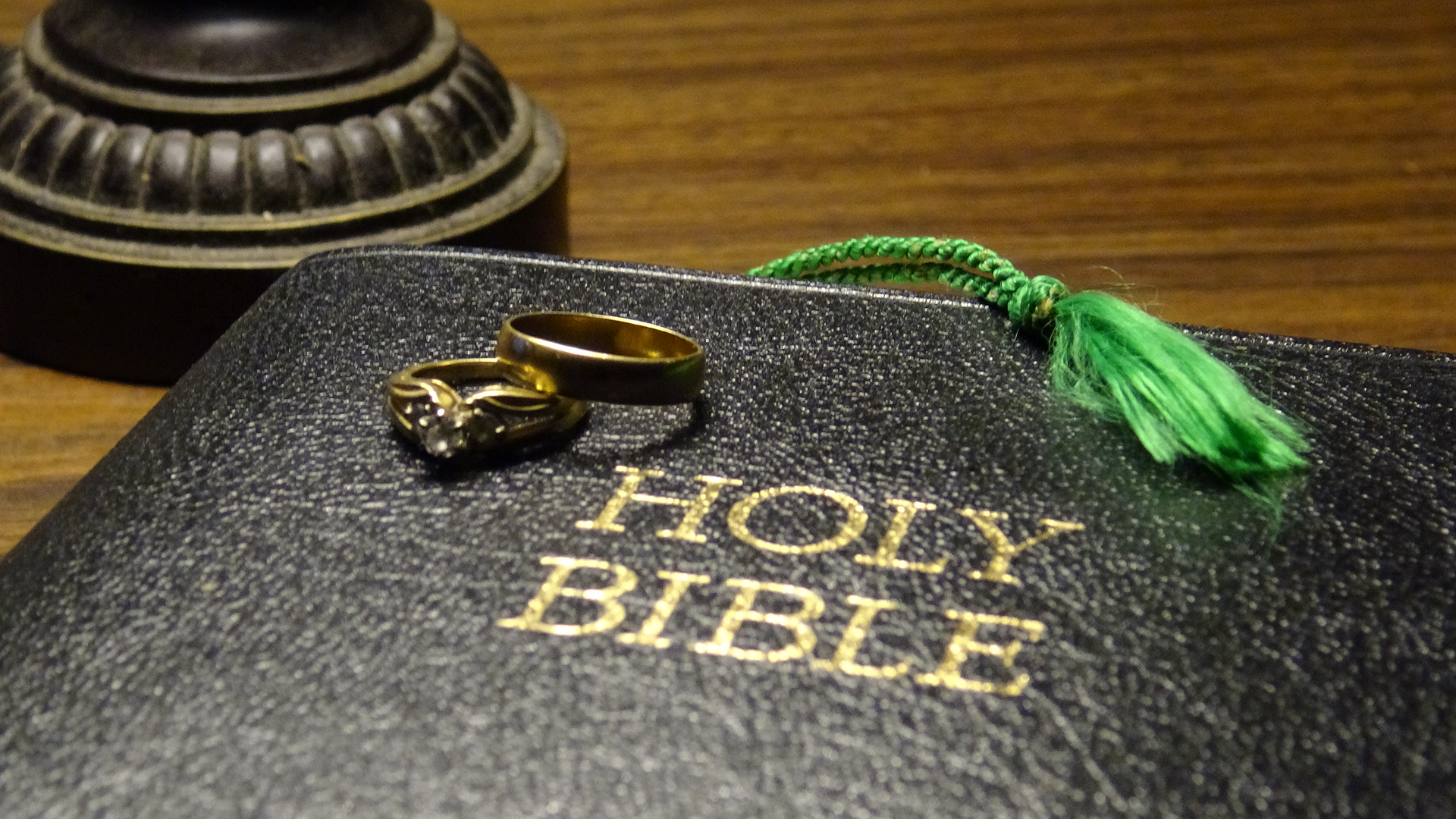